Yacon Syrup comes from the root of the Yacon Plant… which is part of the sunflower family.

Yacon grows in South American and the large roots are cooked and made into the natural syrup. 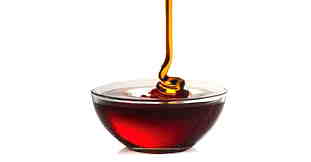 Great Flavor – Tastes a little bit like molasses, but the carbs cannot be absorbed so you get the flavor with little or no calories.

Helps with Digestion – Yacon Syrup contains FOS which is important for colon health and helps with digestion.

Low in Calories – Yacon Syrup is very low in calories and because of that is great for diet minded people. Yacon contains inulin sugar which we can’t break down.

Supports Probiotics – Yacon Syrup contains simple sugars or FOS that are important for supporting your probiotic bacteria. Thus building up the good bacteria in your colon and boosting your immune system which prevents disease.

Dental Health – Because Yacon Syrup does not contain sucrose, making it important for dental health.

Lower Insulin Levels – Studies show that people who used Yacon Syrup have a much lower blood insulin level. Also improves insulin sensitivity which is important for those suffering from insulin resistance.

Contains – Yacon Syrup also contains vitamins A,E, and C. Vitamin E for skin and sexual health… and A and C vitamins which are very important antioxidants, plus potassium for heart health and water regulation. Yacon Syrup helps you absorb B vitamins… and is full of iron which is very important for preventing anemia. Yacon Syrup contains fatty acids like butyrate which are important for reducing stress, metabolism, lowering cholesterol, and improving insulin sensitivity.

Easy to Grow – This plant takes off like Jerusalem artichokes and will grow like crazy, and Yacon also improves your soil… and you can order the roots on-line.

Buy Yacon Syrup – You can buy organic Yacon Syrup on-line or ask for it at your local health food store.

Dr. Paul Haider – Master Herbalist and Spiritual Teacher for over 20 years, helping people to recover and feel healthy. You can also find Dr. Haider on FB under Dr. Paul Haider, Healing Herbs, Shambala Spiritual Transformation Institute, Meditation for the Soul, and Relax Into Success, Punjab teas, and at www.paulhaider.com – feel free to contact him any time. Also check out Dr. Haider’s radio show at http://www.thesourcecenterradio.com/The-Relaxed-Soul.html Oct. show to be about “Something is About to Happen… and what to do about it”

This site uses Akismet to reduce spam. Learn how your comment data is processed.